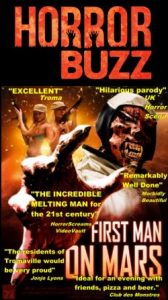 The new horror-comedy film First Man on Mars receives a very nice review from HORROR BUZZ!
“First Man on Mars Is A Great Sci-Fi Throwback…A love letter to classic sci-fi horror B-movies…an incredibly faithful effort to capture the spirit of those vintage sci-fi thrillers that every fan of the genre owes it to themselves to see.”

Read the entire review from horrorbuzz.com.

Loup Garou Sci-Fi Horror Film Festival at Bar Redux in New Orleans is happening Friday October 21st through Sunday Oct. 23rd.  Kicking off the event is Mike T. Lyddon’s latest film FIRST MAN ON MARS on Friday night, followed by ZOMBIE! VS. MARDI GRAS which was co-written, produced and directed by Lyddon in 1995.  On the same night, the short film Blood of a Saint, which was part of the Lyddon produced feature film HORROR ANTHOLOGY MOVIE VOL. 1, will also be shown.
For more info, please visit the BAR REDUX website. 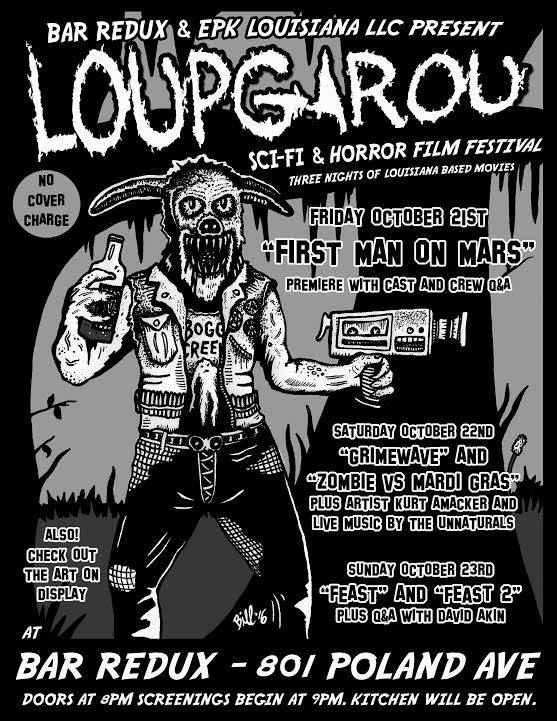 First Man on MarsTrailer #1 from Reel Progress LLC on Vimeo.

UK site HorrorScreams VideoVault reviews First Man on Mars!
An enjoyable film for those who like to watch campy flicks in the same vein as the 70’s grindhouse features or just enjoy B-movie style creature features. Revel in the humour that Lyddon has crafted which is a bit hit or miss depending on your tastes. FIRST MAN ON MARS is best described as THE INCREDIBLE MELTING MAN for the 21st century.
Click HERE to read the entire article.
BUY FIRST MAN ON MARS DVD on AMAZON! 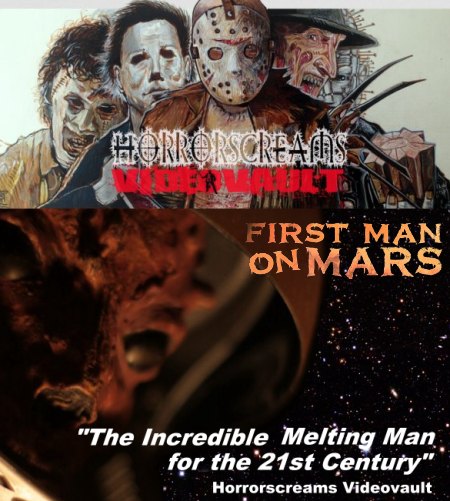 Reel Progress is pleased to announce that the science fiction horror-comedy
FIRST MAN ON MARS is now available on DVD at a variety of stores including
BEST BUY, FYE, FAMILY VIDEO and AMAZON!
Be sure to pick up your copy of this hilarious homage to 1970’s sci-fi creature
features directed and produced by Mike T. Lyddon and distributed through
Tomcat Films. 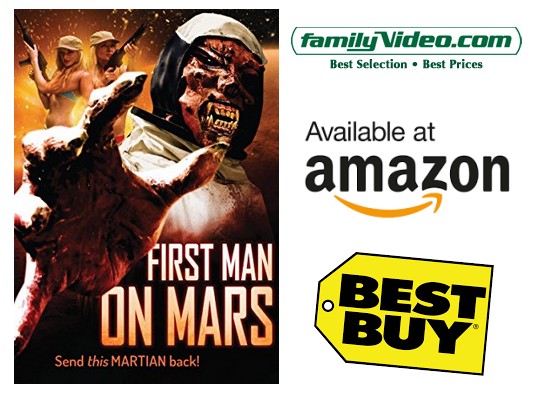 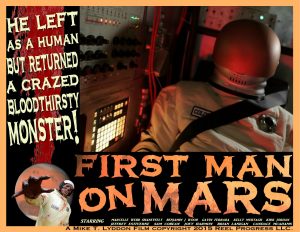 Check out this hilarious and heartfelt review of FIRST MAN ON MARS from the British genre site UK HORROR SCENE.
“First Man on Mars is a funny parody of 1950s B-movies and 70’s schlock. There is so much fun packed into this cheap little movie, the laughs just keep coming, though admittedly most of them are pretty low-brow. But everything from the first frame of the film is designed to be bad and it succeeds at being bad wonderfully.”

Click HERE to find out where to buy FIRST MAN ON MARS, now available on DVD from a variety of fine outlets! 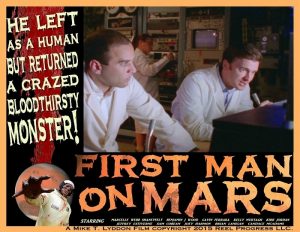 Nice review from Mario at Club des Monstres for the Reel Progress production of Mike T. Lyddon’s First Man on Mars, DVD now available for pre-order on Amazon!
Review is in French, here is an excerpt in English-
“Presented as a satire of small budget films with monsters presented in the American drive-ins in the 70s , the film is light and funny . Full of references, the coroner whose name is Fritz Leiber is a classic writer, popular movies and series of endorsements of its kind in that scene is reminiscent of the classic Hammer – Quatermass. The name of the cosmonaut, Cologne, recalls Carroon in Quatermass and we are obviously dealing with a fan of science fiction and B-cinema. All the characters are caricatures , except perhaps Porscha , the Bullets and Bimbos model that has a bit more brains than expected. The cast seemed to have fun. Some gore effects accumulate at the end of film while bikinis remain in place. Ideal for an evening with friends, pizza and beer.” 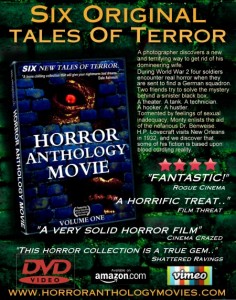 Reel Progress announces the re-release of HORROR ANTHOLOGY MOVIE Vol. 1 on AMAZON, and a very special offer for you!

For a limited time when you buy HORROR ANTHOLOGY MOVIE VOL. 1 DVD, you get a second copy for FREE! 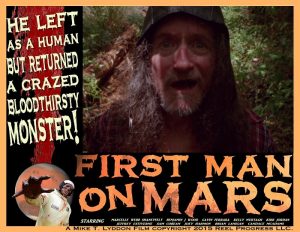 Fantastic premiere review for the Reel Progress production of FIRST MAN ON MARS from Stephanie at Morbidly Beautiful.

“The kill scenes are delightfully gory and a blast to watch — with plenty of head squeezing, eye-popping, face-ripping fun. The alien-infected killer astronaut looks great, with some rather impressive makeup effects on display.”

Check out the full review by clicking HERE.

The kind folks over at TROMA ENTERTAINMENT gave FIRST MAN ON MARS a big THUMBS UP!
First Man on Mars is available for pre-order on AMAZON and other fine outlets.
The feature film by Mike T. Lyddon has U.S. street date of SEPTEMBER 27TH. 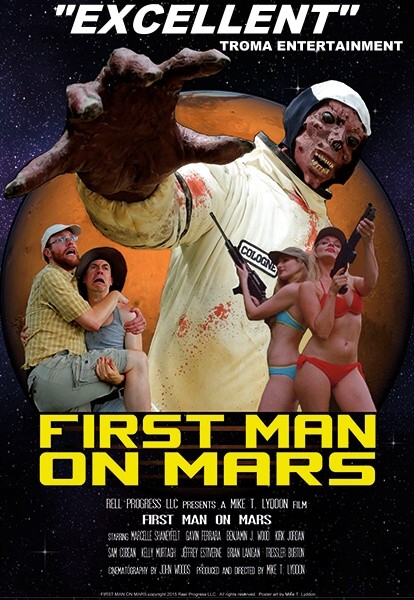