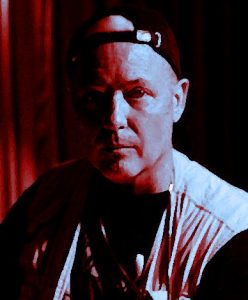 Mike Lyddon Bio
Mike T. Lyddon has been making no-budget indie genre films for more than 25 years.
His latest feature film, “Witch Tales”  aka Cuentos de la Bruja (2020) is a horror anthology based upon lesser known 1950s pre-code horror comic books in the vein of Tales from the Crypt.  It landed in 13 festivals and garnered 6 awards over the 2019-2020 seasons including Best Feature Film at Something Wicked Film Festival in Atlanta and Best B-Movie at Flicks Film Festival in London.
Lyddon’s last film, “First Man on Mars,” was picked up by Summerhill Films/Tomcat Films and has been in distribution for the last 3 years. It has received substantial critical praise from many genre critics.  Troma called it “Excellent,” while Morbidly Beautiful said it was “A joy to watch.”  UK Horror Scene said it is a “Hilarious Parody” and Horror Buzz calls it “…a great sci-fi throwback.”
It is currently available on multiple platforms including Amazon, Google Play, Xbox, and Tubi TV.

In 2018, Lyddon sold his first short story, “Thing in the Shed,” to publisher Deadman’s Tome for use in the new horror anthology collection, MONSTER PARTY.  Interestingly enough, the story is based upon the film he made of the same title and released in the Horror Anthology Movie Vol. 1 DVD in 2013.  “It was odd adapting a short film/script into a short story as this is the reverse of what normally happens, but I was pleased with the results and happy the story finally found a home in print.”  He has an Amazon Authors page that includes Monster Party as well as several issues of Monster! magazine he wrote articles for.
He has since sold several stories to a variety of publishers and a number of illustrations to magazines such as Cosmic Horror Monthly and Lovecraftiana.

You can watch Lyddon’s new documentary about pre-code comic books called “Haunted Thrills” (2022) on youtube, rumble, bitchute.  The film is an official selection in 19 film festivals and has won 6 awards for best short documentary thus far.