In celebration of our favorite day of the year, October 31st, RPLLC has dropped the price on the amazing WITCH TALES blu-ray – HORROR ANTHOLOGY MOVIE DVD combo to $10.31 with FREE DOMESTIC SHIPPING!
Now thru Nov. 1st you can take advantage of this amazing offer.  Both blu-ray and DVD are signed by the filmmaker and the WITCH TALES blu-ray is NUMBERED.  Play the HORROR TRIVIA GAME and enter to WIN one of ten MOVIE PROPS from the film!
Drawing will be held the weekend of January 7th, 2022!
WITCH TALES is a horror anthology film based upon stories from pre-code horror comic books much like EC’s TALES FROM THE CRYPT.  On Halloween night, a seductive witch introduces chilling tales of terror while she concocts her own very special Halloween brew…
Click here to BUY THE COMBO. 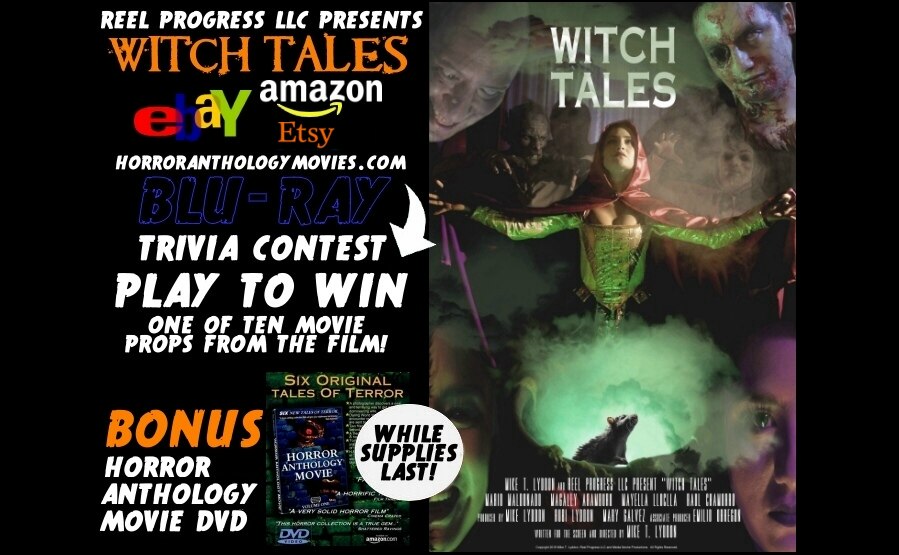 Donovan and John talk to filmmaker – writer Mike T. Lyddon in the latest podcast called IN THE MOUTH OF MONSTER.  Because the show was over 2 hours long, it was split into 2 parts.  Part 1 is currently available and the guys talk about Mike’s foray into horror flmmaking and his latest film, a documentary called HAUNTED THRILLS.  Pre-code horror comic books are discussed along with Lyddon’s previous feature film WITCH TALES that was the basis for the Haunted Thrills documentary.  The inspirations for Lyddon’s 2016 horror-comedy FIRST MAN ON MARS are revealed along with an appreciation of original drive-in theater culture.
Don’t miss it!  Listen to it HERE. 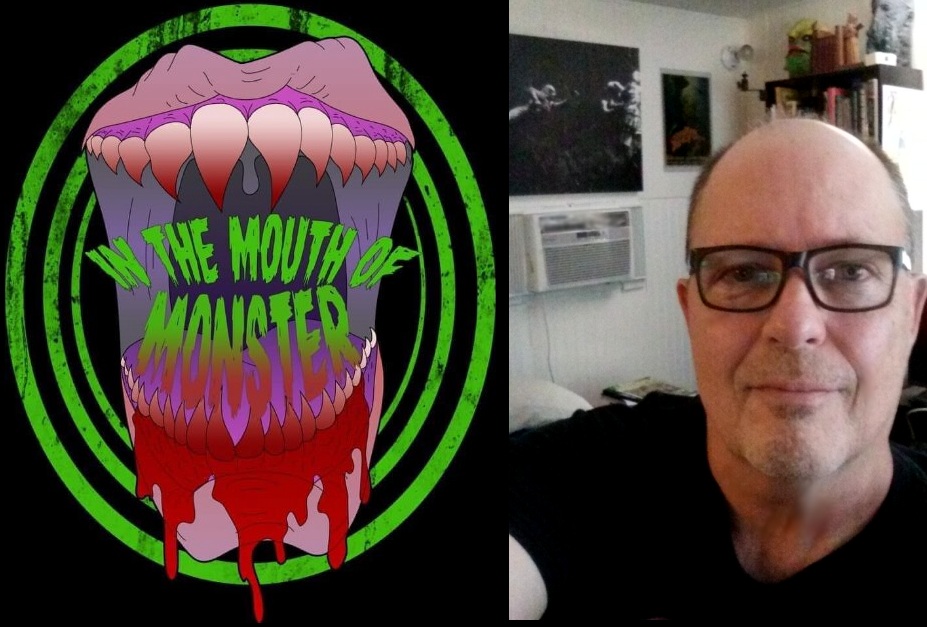 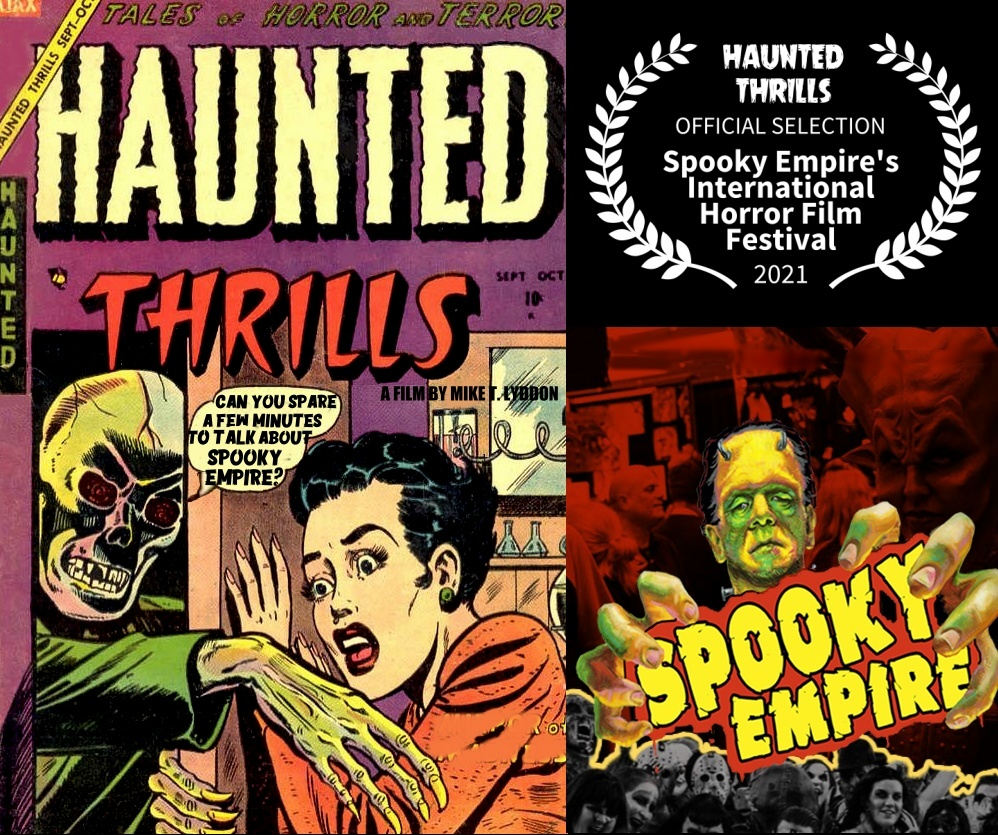 Dateline: Jacksonville, Florida
Mike Lyddon’s new documentary film HAUNTED THRILLS is an official selection at the American Golden Picture Internatonal Film Festival which will be held in Jacksonville, Florida in June, 2022.
The festival curates films monthly and the semi-finalists are judged for screening at the June event.
HAUNTED THRILLS is a documentary featurette about the artists, writers, and editors of those amazing pre-code horror, sci-fi, and crime comic books of the early 1950s.
It is a companion film to Lyddon’s previous feature called WITCH TALES, a horror anthology movie shot entirely in Peru that adapts pre-code horror comic book stories to the screen.  It is now available on blu-ray.
Click HERE for more info and purchase information. 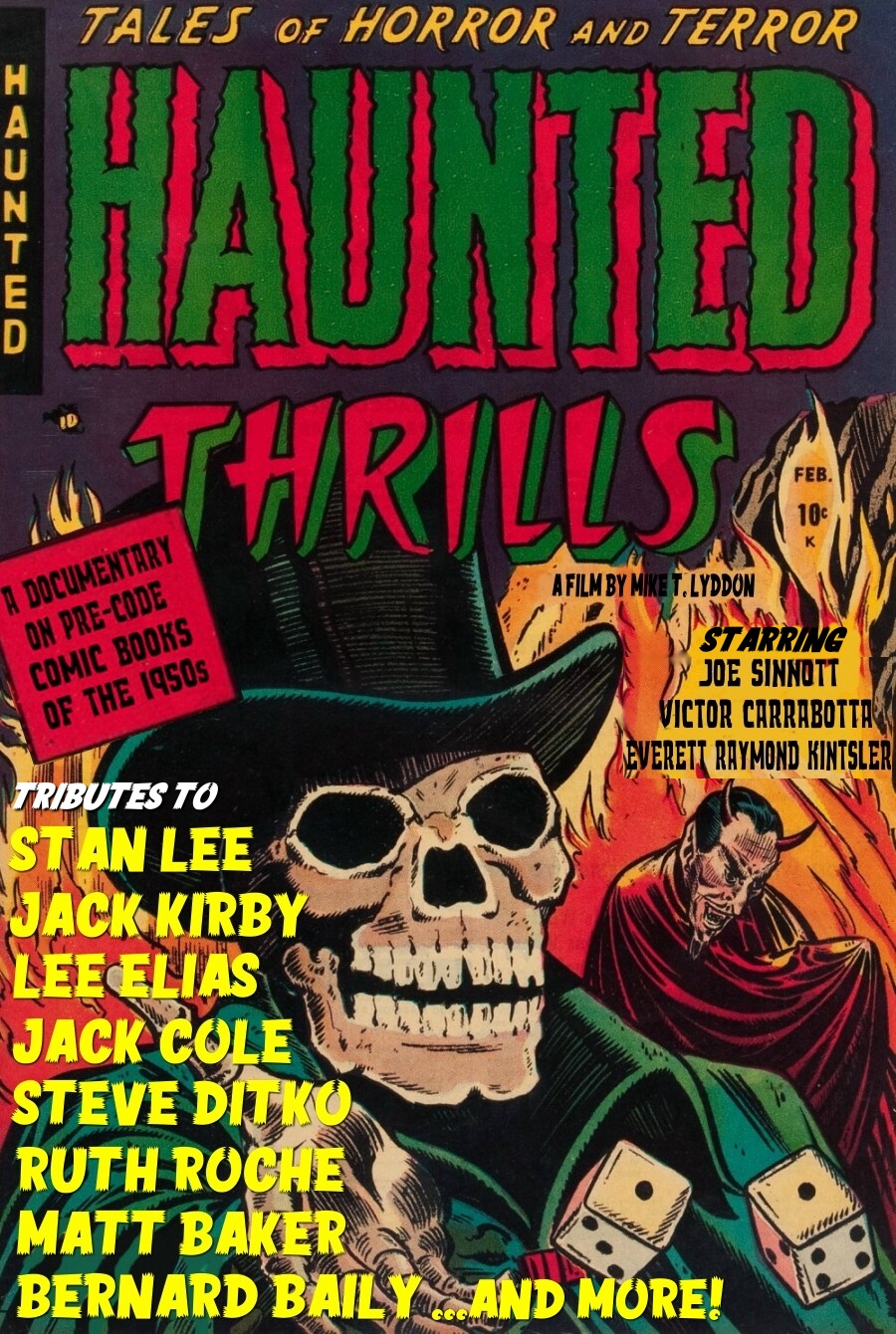 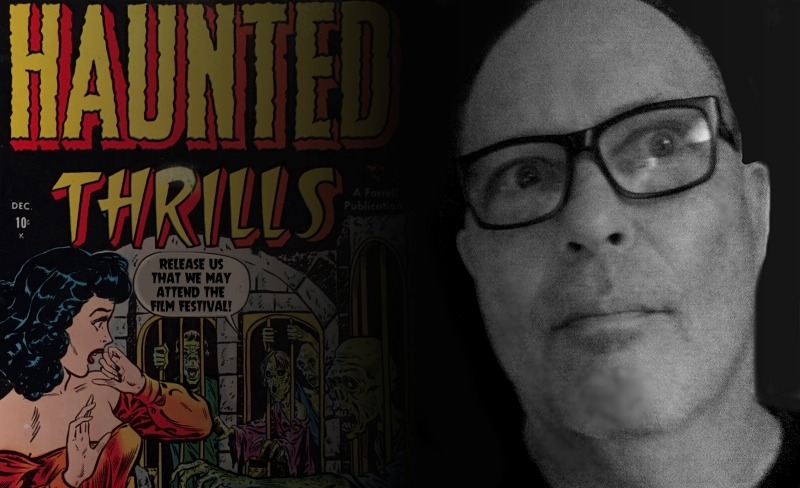 Mike Lyddon and his latest indie film, a documentary on pre-code comic books of the 1950s called Haunted Thrills, and official entry in the Horror Bowl Movie Awards.

Filmmaker Mike T. Lyddon’s (Witch Tales, First Man on Mars) latest documentary on 1950s pre-code horror comic books called HAUNTED THRILLS (2021) is an official selection of the HORROR BOWL MOVIE AWARDS in Punjab, India.
The Horror Bowl is a popular event celebrating its fourth year recognizing a wide variety of indie horror and genre films from across the globe.
Lyddon’s film is a companion piece to his previous feature WITCH TALES that made the festival rounds in 2019/2020 as an official entry in 12 festivals worldwide and garnering several awards including Best Feature Film and Best B-Movie.  It was released in the summer of 2020 on blu-ray and is available direct on Amazon, Ebay, Etsy, and Lyddon’s own website, horroranthologymovies.com.
For more information, please visit the Ebay page where the film is on sale bundled with Mike Lyddon’s HORROR ANTHOLOGY MOVIE VOL. 1.

Mike T. Lyddon’s new documentary featurette on pre-code golden age horror comics called HAUNTED THRILLS is an official selection at the GAINESCON Film Festival in Saint Petersburg, Florida.
The film will screen on either Friday, November 19th or Saturday the 20th at the popular Studio Movie Grill and festival winners will be announced on the 20th as well.
This two day event features real indie films in the genres of action, sci-fi, fantasy, and horror.
“I was thrilled to get HAUNTED THRILLS on the festival board at Gainescon as an official entry and I plan to attend the event.” Lyddon said. “It’s great to break the ice at the start of fall festival season and I couldn’t think of a better event than Gainescon to begin the journey.”

This short documentary is a companion piece to Lyddon’s previous feature film WITCH TALES that contains stories adapted from those awesome pre-code horror comics of the 1950s.
Lyddon’s film will play several festivals before being officially released on RUMBLE and subsequently on Youtube and a few other platforms.
Make sure to bookmark this site for further updates!

WITCH TALES 🎃😈 Halloween Horror Anthology Blu-ray HALLOWEEN SALE
The Critics have spoken!
“Delightful cartoonishness and plenty of practical gore…WITCH TALES is an enjoyable romp” – RUE MORGUE
“SPOOKY and DISGUSTING” – House of Tortured Souls
“EFFECTIVELY GROSS EFFECTS” – Voices from the Balcony
“Lyddon knows how to tell a FRIGHT-FARE story well” – Ghastly Grinning
“WITCH TALES is a great anthology horror film that doesn’t hold back on the gore..” – Ciao Handy Films
“This film would be perfect for you on a chilly night around Halloween time.” GNoH
Signed/numbered limited edtion WITCH TALES bluray on SALE NOW
FREE signed Horror Anthology Movie vol. 1 DVD
Enter the HORROR TRIVIA contest and get entered to WIN one of ten MOVIE PROPS from the film! 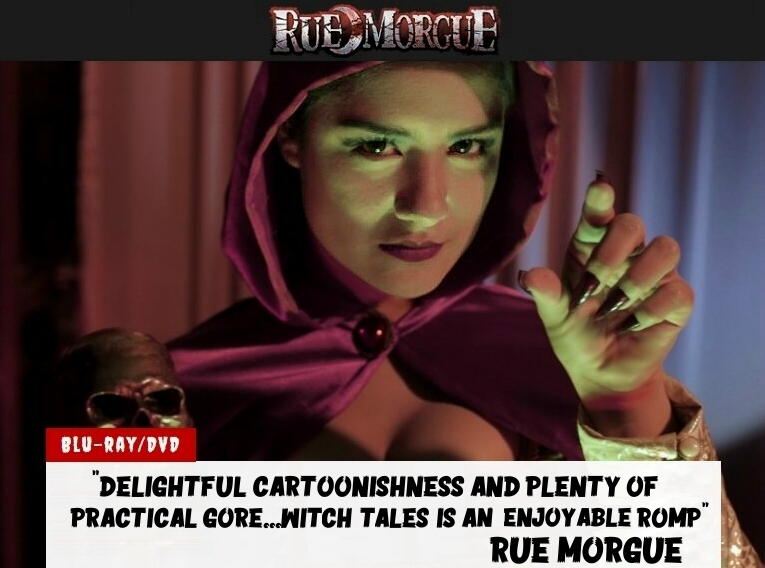 September kicks off our favorite time of year…the season of HALLOWEEN!
To celebrate, we have our Halloween HORROR MOVIE BUNDLE on sale NOW!
Get the WITCH TALES (2020) signed and numbered BLU-RAY along with a FREE signed DVD copy of HORROR ANTHOLOGY MOVIE VOL. 1 for the insane low price of 12.90 with FREE SHIPPING in the U.S.!
And that’s not all!  From now until November 5th when you play the special HORROR TRIVIA game inside every WITCH TALES blu-ray case, you are entered to WIN one of ten MOVIE PROPS from the film!
Click here for more info and good luck with the contest! 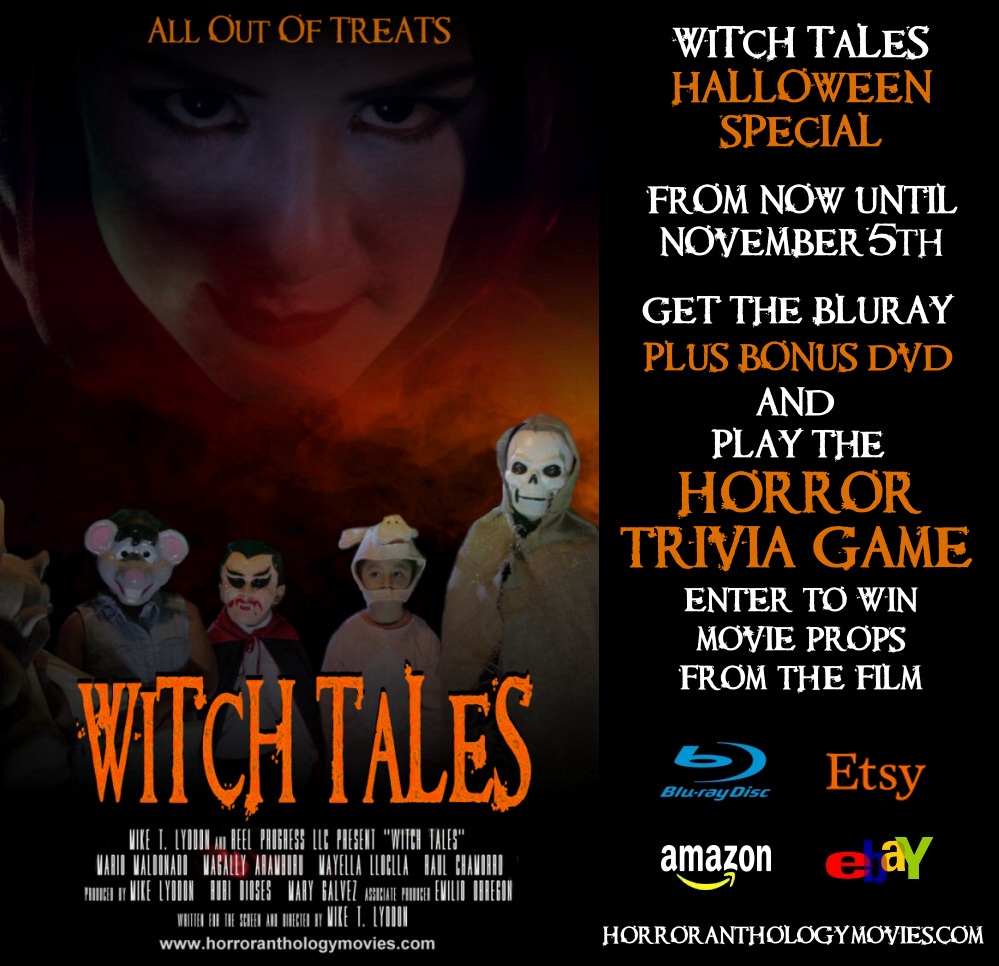 The latest August 2021 issue of Cosmc Horror Monthly is a celebration of writer H.P. Lovecraft who was born on August 20th, 1890 in Providence, Rhode Island.
The magazine features a few classic tales by Lovecraft along with several new Lovecraftian stories by contemporary writers with illustrations throughout.
Filmmaker Mike T. Lyddon contributed his story “The Hogansburg Horror,” a terrifying meditation on the old gent’s classic tale, “The Dunwich Horror.”  Lyddon also has a few illustrations in the issue including a full page rendering based upon Lovecraft’s “From Beyond.”
Other stories include The Dust of Nyarlathotep by Scott Michael Hutchings and The West Arkham Reservoir by J.M. Faulkner.
You can buy this issue or subscribe to Cosmic Horror Monthly directly from the website. 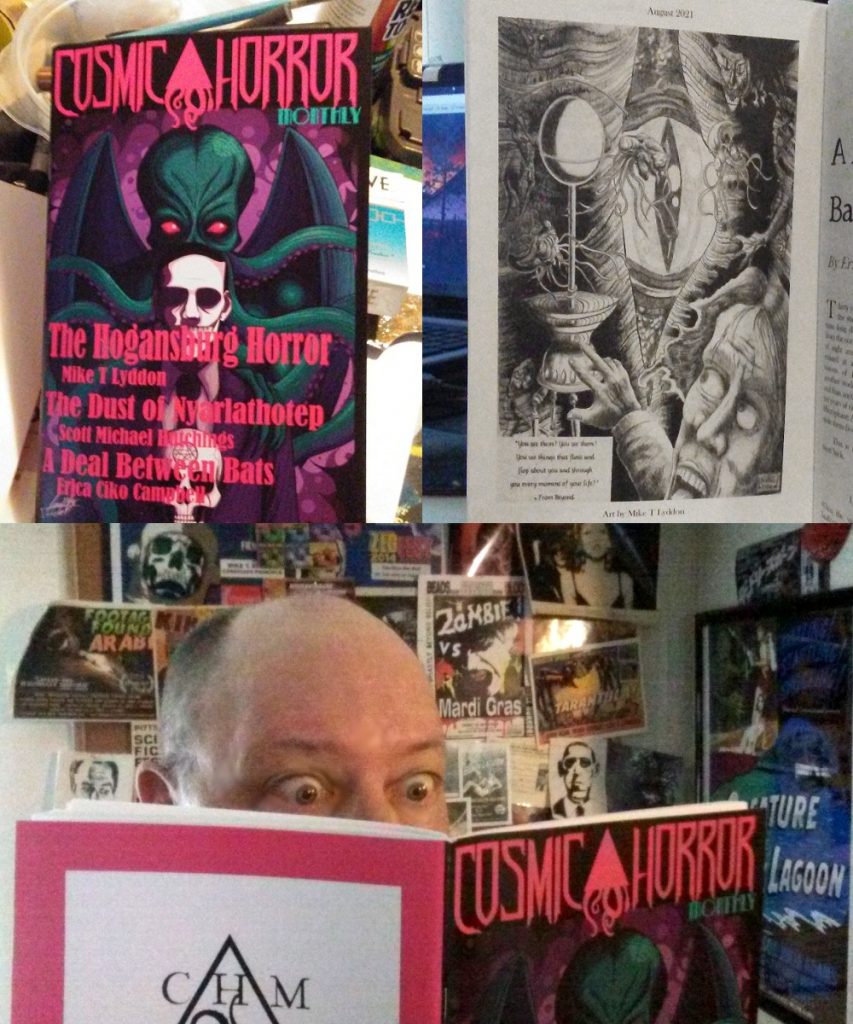