Excellent new video from Ciao Handy Films on their YT channel talking about indie Horror Anthology Movie Vol. 1 with a few mentions of WITCH TALES and FIRST MAN ON MARS.
Interest is focused on Blood of a Saint, 5 Miles Straight Ahead, and The Cordyceps Principle, 3 of the 6 segments you will find on the HORROR ANTHOLOGY MOVIE DVD on sale now for $6.95 with FREE SHIPPING on Ebay.
If you want to get it for FREE, simply head over to Ebay (or on this site) and get the NEW WITCH TALES blu-ray and we’ll send you the DVD absolutely FREE.
The DVD has 6 tales of original horror clocking in at nearly two hours long, very rare for a horror film.

WITCH TALES comments from HORROR FANS!
We love getting good reviews from film critics and bloggers, but it’s another level of awesome to receive unsolicited praise from the fine people who support the indie film community…the horror movie fans!
Here are a few unsolicited reviews from film festival-goers, blu-ray buyers, and Vimeo customers –
“I really enjoyed it. All the stories were solid and I will be recommending to my friends.”
“I am a huge horror fan and I loved Witch Tales. Well done.”
“Watched my (blu-ray) copy last night, I really enjoyed it.”
“Excellent Special Makeup Effects.”
“The soundtrack and sound design were very good.”
“Best feature film I’ve seen at the festival.”
“..excellent horror anthology. Highly recommended!”
BLU-RAY (Best deal with FREE shipping) – https://www.ebay.com/itm/203022663315
VIDEO ON DEMAND – https://vimeo.com/ondemand/witchtalesmovie 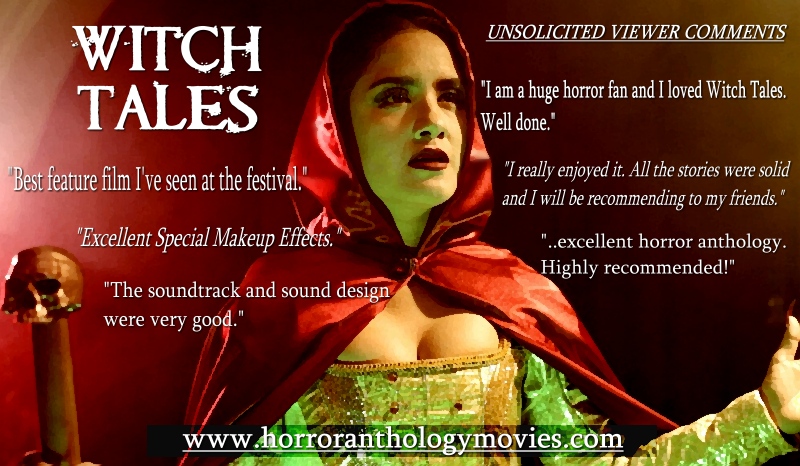 Continuing with his ongoing series of HORROR ON SEA film festival movies, Ciao Handy presents his latest video featuring Mike Lyddon’s new indie horror feature WITCH TALES (2020).  Ciao Handy has been making these videos for months now, covering the wide range of short and feature-length films found at the Horror On Sea festival from January 2020.  Witch Tales had the honor of opening the festival on Friday, Jan. 10th in its last showing of a year’s worth of horror film festivals starting Dec. of 2018 with the INFIERNO EN LOS ANDES event and continuing all the way through 2019, racking up 9 nominations and 6 awards including Best Feature Film, Best B-Movie, Best MakeUp Effects in a total of 13 film festivals over the last 13 months (funny how that works out lol).
WITCH TALES is now available on BLU-RAY in a special limited edition of 300.  Play the trivia game and win one of ten movie props from the film!
If you prefer streaming horror flicks, you can watch both English and Spanish language versions of the film on VIMEO. 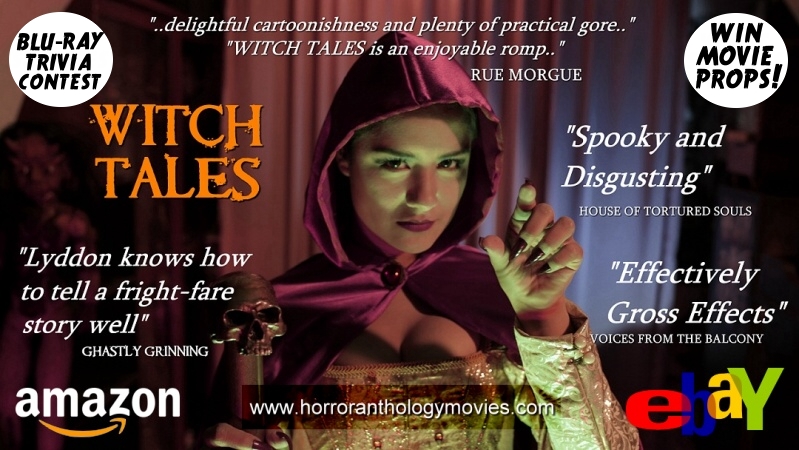 Mike Lyddon and Reel Progress LLC are pleased to present a new series of classic graphic lobby cards for WITCH TALES, the feature-length indie Halloween horror anthology movie now on BLU-RAY and VIMEO VOD.
Buy the blu-ray and play the HORROR TRIVIA QUIZ to enter for a chance to win one of ten ghoulishly good movie props made especially for WITCH TALES! 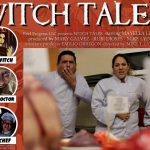 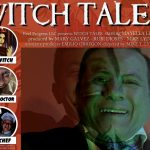 Cycle of Horror from Witch Tales 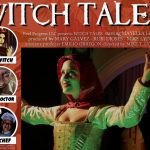 The WITCH from Witch Tales 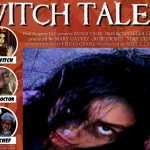 Experiment in Terror from Witch Tales

Mike Lyddon and Reel Progress LLC are pleased to present Witch Tales (2020) Trailer #2 English version now on Vimeo.  This new indie horror anthology film was shot simultaneously in both Spanish and English languages in the country of Peru, a historical first in the history of cinema for anthology movies.  Both versions are on the new Witch Tales aka Cuentos de la Bruja blu-ray available on this site, Ebay, and Amazon.
Buy the blu-ray and get Horror Anthology Movie vol. 1 DVD FREE.
Play the trivia game and enter to win one of ten MOVIE PROPS from the film.
The English version and Spanish versions (with English subs) are available on Vimeo VOD.

Mike Lyddon and Reel Progress LLC are pleased to present a new round of classic WITCH TALES lobby cards in the style of the 1960s and 70s.  We love lobby cards and think they’re a great way to promote a film and show off some CLASSICK scenes from the movie!
This movie lobby card series feature six images depicting scenes from all three tales of terror presented in the WITCH TALES horror anthology film.
The stories are (in order) CYCLE OF HORROR, EXPERIMENT IN TERROR, and BON APPETIT.  Can you guess which ones are which?
To find out, visit our EBAY store and purchase the WITCH TALES special limited edition blu-ray on sale NOW.
Each purchase comes with a free new DVD copy of HORROR ANTHOLOGY MOVIE vol. 1 and you can enter to win one of ten scary and sometimes sexy MOVIE PROPS from the film!
Visit EBAY today and grab your copy while supplies last! 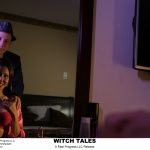 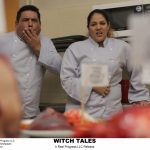 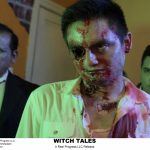 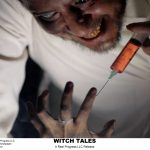 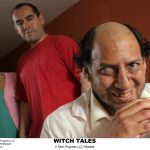 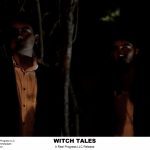 The long-running and highly acclaimed genre movie site GINGER NUTS OF HORROR helmed by Jim McLeod has published a lengthy press release of WITCH TALES aka CUENTOS DE LA BRUJA, complete with synopsis, credits, short bio’s, and links to where to rent or buy the film and watch the trailers.
The indie horror anthology film WITCH TALES is currently available as a limited edition blu-ray being promoted with a HORROR TRIVIA CONTEST where you can win one of 10 movie props from the film.
It is also available on VIMEO in both versions, the Spanish language version with English subtitles, and the English language version.
Ginger Nuts of Horror press release. 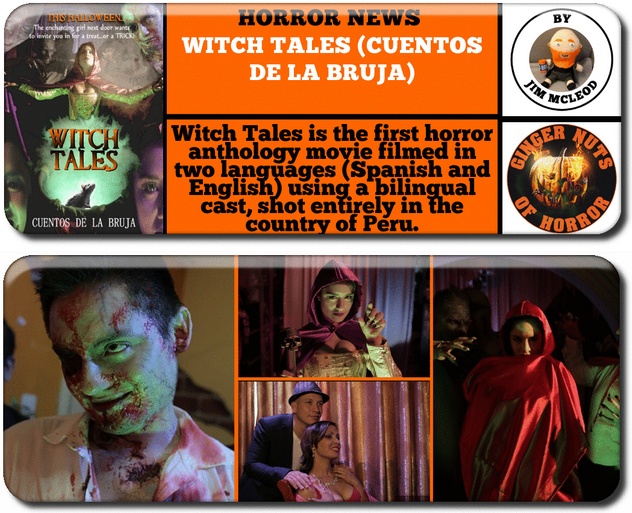 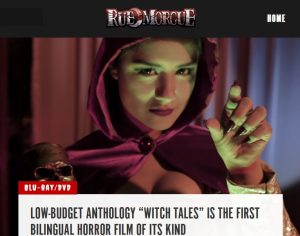 Excellent write-up and review of indie horror anthology WITCH TALES (2020) blu-ray and Vimeo VOD from Grace Detwiler at RUE MORGUE magazine.
“Low-Budget Anthology Is The First Bilingual Horror Film Of Its Kind.”
Some highlight quotes –
“WITCH TALES brings three spooky Pre-Code comic stories to life, with a delightful cartoonishness and plenty of practical gore.”
“By not only making WITCH TALES accessible but also wholly available, to both English and Spanish speaking audiences is an ability few other films and filmmakers can boast.”
“WITCH TALES is an enjoyable romp through Pre-Code horror comic history.”
A nice plug for the HORROR TRIVIA CONTEST includes pics of the fabulous MOVIE PROPS used in Witch Tales you can win…if your trivia skills are up to it!
Also included are both trailers of the film – the English language and Spanish language (with CC in English) versions are in the write-up.
Click here to read the Rue Morgue article.

Top notch fright film website HORROR CULT FILMS UK gives indie movie WITCH TALES a fiendishly good press write-up for the new BLU-RAY and VIMEO video on demand releases of the film.
The indie horror anthology WITCH TALES was made entirely in Peru and filmed simultaneously in two languages using a bi-lingual cast.  Both Spanish and English language versions are on Vimeo, and both versions are presented on the special limited edition signed and numbered blu-ray, but that’s not all!
Play the HORROR TRIVIA CONTEST – in each blu-ray you will find an insert with 3 horror trivia questions.  Just send in your answers along with your name and special number written on the blu-ray disc.  You will be automatically entered to win one of 10 fangtastic film props used in the movie!  More info here.
Click Here to visit the Horror Cult Films Website. 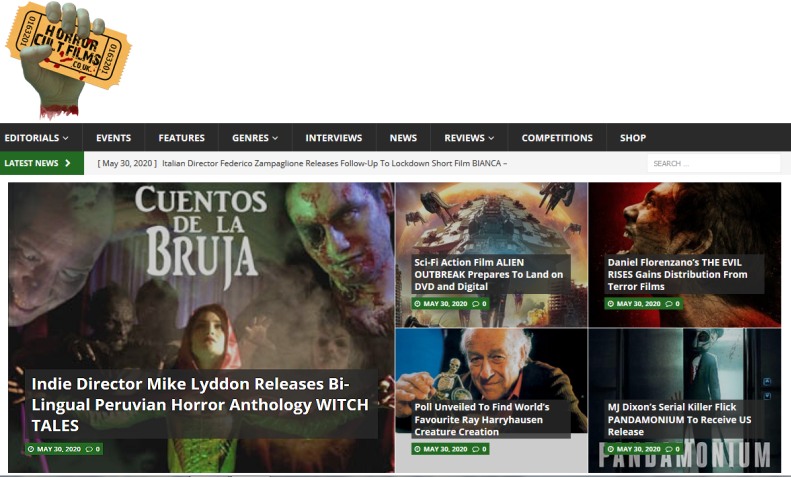 An excellent blog for all things Horror and Halloween, The Horrors of Halloween offers a ghoulishly good press release on the new WITCH TALES aka CUENTOS DE LA BRUJA feature-length horror anthology movie covering the releases of both versions of the film on VIMEO as well as the exciting limited edition blu-ray featuring a HORROR TRIVIA CONTEST where you could WIN one of ten sexy and sick movie props from the film!
Visit the Horrors of Halloween website. 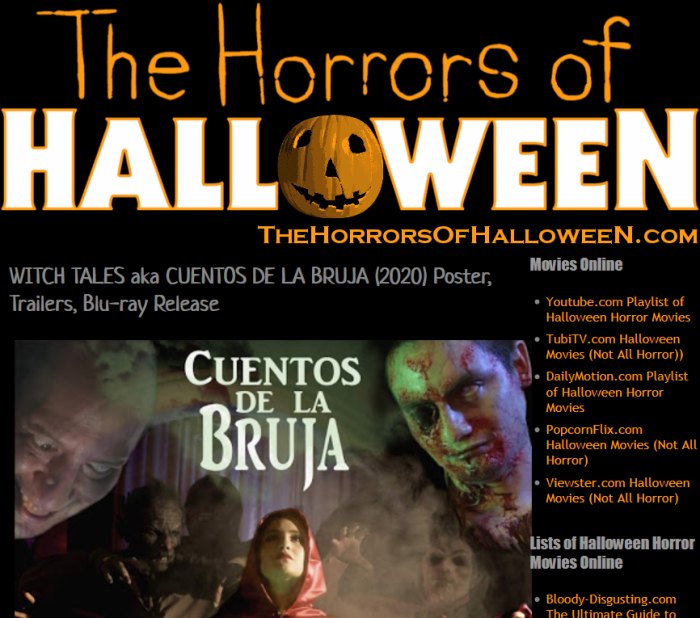