This Halloween season here at horroranthologymovies.com, we celebrate the month of WITCHTOBER with incredible deals on all indie RPLLC movies including Witch Tales and Horror Anthology Movie Volume 1 and 2!
Witch Tales (2020) is the latest indie feature horror film from Mike Lyddon and RPLLC.  The plot revolves around a seductive witch who introduces three terror tales while concocting a very special Halloween brew.  The stories are based upon classic EC style pre-code horror comic book stories in the vein of Tales from the Crypt.  The film stars Mayella Lloclla as The Witch.  Mayella is a noted Peruvian TV and Film actress who has appeared in many films and TV series.  Witch Tales is also the first anthology film ever produced in two languages: English and Spanish, both of which are on the limited edition signed blu-ray.
Horror Anthology Movie Vol. 1 is an epic anthology clocking in at 117 minutes and featuring six original tales of horror ranging from science fiction to the supernatural.  It stars Ben Matheny, a New Orleans based actor who has had roles in American Horror Story, Scream Queens, and a variety of feature films.
Horror Anthology Movie Vol. 2 brings both classic and modern horror stories to life with four tales based upon works by Joe R. Lansdale, Edgar Allan Poe, Jeff Strand, and Lafcadio Hearn.  Catherine Ashton stars in the segment called “Of a Promise Broken.”  She was the child star in the 1992 film starring Julian Sands called “Tale of a Vampire,” supposedly based upon the story “Annabel Lee” by Edgar Allan Poe.
HORROR BUNDLE – right now you can get the Witch Tales blu-ray and the Horror Anthology Movie vol. 1 DVD for the incredibly low price of $16.80 on Ebay with FREE SHIPPING!
But that’s not all!
You can also play the HORROR TRIVIA CONTEST inside every Witch Tales blu-ray and enter to WIN one of ten MOVIE PROPS from the film.
Additionally, Horror Anthology Movie vol. 2 is on sale on VIMEO VOD.  Rent or download at 30% off the normal price! 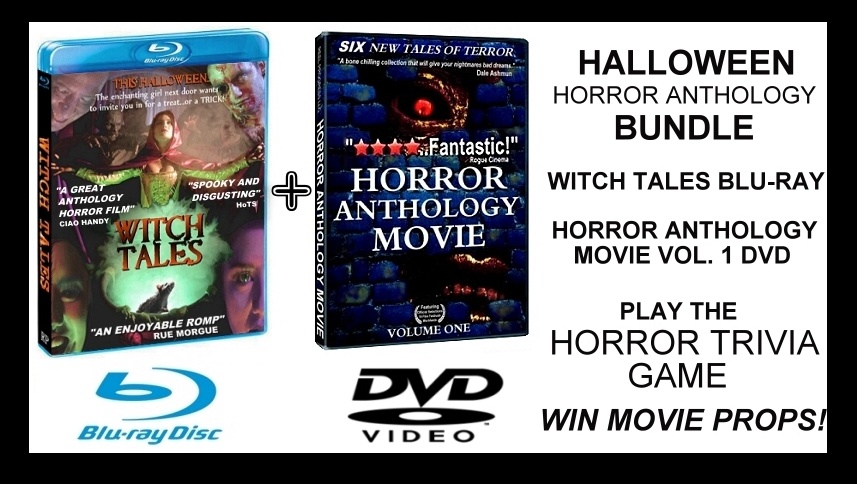