A little look behind the scenes of the making of WITCH TALES, now for rent on VIMEO and on a limited edition blu-ray.
The 3 tales presented in Witch Tales are based upon stories from lesser-known pre-code horror comic books of the 50s in the vein of TALES FROM THE CRYPT.
Experiment in Terror (shown on the cover of FANTASTIC FEARS #8) was penned by Ajax-Farrell editor RUTH ROCHE, who wrote many of the stories for HAUNTED THRILLS, FANTASTIC FEARS, and others in the Ajax line up. She was one of the few women in pre-code comics at the time and worked for Jerry Iger at the “Iger Shop.”
BON APPETIT, originally known as CHEF’S DELIGHT, was also later released as FOOD FOR GHOULS in Eerie Publication’s WEIRD magazine in the 1960s. It first appeared in MYSTERIOUS ADVENTURES #20 in 1954.
CYCLE OF HORROR originally appeared in CHAMBER OF CHILLS #16 from Harvey Comics in 1953. The writer is unknown, probably the editor at the time, but the artist was Al Eadeh, who did a lot of work for Harvey in the 50s.
#precode #goldenagecomics #horrorcomics #HorrorArt #1950s #horrormovies #talesfromthecrypt #ECcomics #AjaxFarrell #Harveycomics #HauntedThrills 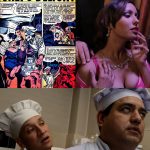 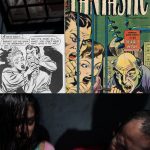 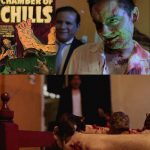